A different kind of Beginner-level book 4: a spiralling syllabus

A spiralling syllabus is NOT just about grammar

Hopefully, you’ll have read our previous post on a spiral syllabus. In this short post, I want to add that the spiral syllabus doesn’t only apply to grammar. The same principles also apply to vocabulary and ‘functions’ and indeed to whole exchanges. In the case of vocabulary, this is how we have done it in Outcomes Beginner – other options are, of course, available: 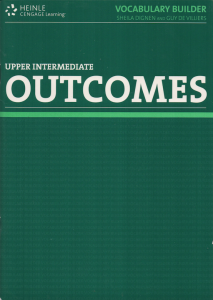 Where the goal of a lesson is to help students manage a particular exchange (‘conversation’ might be a little too grand to describe the speaking of beginner-level students), we hope that students develop an understanding of aspects of grammar which  are then recycled and expanded upon later in the course (as described in our previous post). However, it’s important to understand that the goal of the lesson is the exchange itself: finding out where people lived, making plans, asking for directions, etc.

The idea is that these common exchanges are themselves revised and recycled as a whole. For example, past questions are taught in a conversation between travellers about what they did the night before. This is the main focus of the lesson and students practise some past and present simple questions. However, the conversation that students then hear in the listening section has an added bit where people also talk about their plans for the day in exactly the same way as they did in the conversation they learnt in the previous unit. In addition, the conversation reappears slightly differently in another unit about the weather, and then in yet another on celebrations. Some of these are receptive revisits, some productive. We also include review tasks (similar to the quick review feature in Face2Face), where students are asked to either repeat a speaking task from a previous lesson or adapt it slightly for a new partner/context.

Recycling situational/functional language like restaurant transactions can be a bit more difficult. Typically, this appears just once in a beginner course and the situations may be difficult to blend with other topics. However, it is still possible to approach such things more than once. In Outcomes Beginner, a lesson in the first unit focuses on buying drinks and How much is it?  Both how much and numbers have been focused on in a previous lesson and we teach some words for drinks and phrases they may hear – specifically What would you like? and Anything else?. Three lessons later, there is a focus on ordering a meal. This obviously requires different vocab, but shares a lot of the same functional language.

Of course, maybe this is still not enough (depending on students’ exposure to these kinds of conversations outside the class) and many teachers will want to revisit this again, but the principle of spaced practice built in to a spiral syllabus is better than immediately re-practising things. You could, for example, set another practice up as part of a speaking assessment later in the course.

Want to develop your teaching? Take one of our summer school courses.