Phrase of the day: not bat an eyelid

One of the things that our students often comment on when they come to London is the fact that they often see things here that seem strange or that would cause upset or offence in their own country, but people here don’t seem bothered by at all – people don’t pay attention to them or maybe don’t even see them at all. In other words, they don’t bat an eyelid when they happen. It’s sometimes said that you could walk naked down the streets of London and nobody would bat an eyelid. 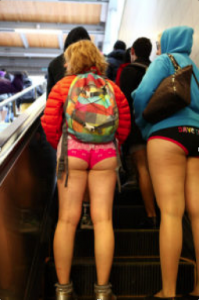 In fact, last week something very similar to that actually happened! Hundreds of people took to the street without wearing trousers or skirts. They were dressed as normal otherwise – hats, woolly jumpers, winter boots and the like – but below their waists it was just pants (for men) and knickers (for women)! Strangely, the other thing that two different students commented on was almost the opposite to the pants-only day. They were were surprised (I would even say impressed) that women could walk the streets in a full burka and nobody here would bat an eyelid. 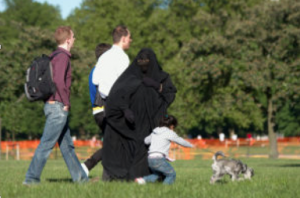 We then discussed the degree to which not batting an eyelid is an English or even a London thing. I think you can say that there’s an element of truth about the latter idea. London has always been an incredibly diverse place and a good deal of tolerance goes with that. Many people do come here to escape from more conservative or repressive environments and find the space to be themselves. Not batting an eyelid can also be linked to the English desire for privacy and to keep yourself to yourself. There’s a deep-rooted idea that if you don’t interfere with my business, I’ll ignore yours.

It could also be linked to the English stiff upper lip or sang froid (/sɒŋ ˈfrwɑː/), which is the idea of the English being calm under pressure and not showing too much emotion. But then there may also be something of what others may call English hypocrisy! We do see things, but it’s not cool to look as though we’ve seen them! Not batting an eyelid can also come with a darker side in that we often get very adept at walking right past homeless people in tents on busy streets or ignoring people with mental health problems who are in crisis on the streets.

Having said all that, apparently the pants-only day (there confusingly called ‘No Pants Day’ because pants means trousers / jeans in American English) originated in New York. So maybe not batting an eyelid is just a big city thing – or just depends on what you are used to.

Want to learn more with Lexical Lab? Take a course with us next summer.