Word of the day: caff

Last Monday, I was invited to the ELTONs – the British Council awards ceremony celebrating innovation in English Language Teaching. I had a bit of a late night and then had to get up early as I had a meeting at 9.30. I could’ve done with another hour or two in bed, I can tell you. After the meeting, I was starving and decided to head to one of my favourite caffs – Bar Bruno in Wardour Street, Soho.

Now, you may well be wondering what the difference is between a caff and a café. Well, a caff is a very particular type of café – it’s almost always family-run (in many parts of London, caffs have often been in the same family for several generations) and the families will often be Italian, Greek, Turkish or Portuguese; caffs are cheap and cheerful –  they’re inexpensive, the food is of reasonable quality and they’ll never win any prizes for interior design – in fact, the décor usually hasn’t changed for years! Most importantly, though, they serve builder’s tea – strong tea made from a teabag that’s been left in for a long time and with only a splash of milk added (In fact, I often ask them to leave the bag in – and decent fry-ups – meals made from fried food. 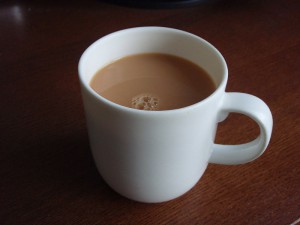 If you had a heavy night – drank too much (alcohol) – the night before and are nursing a bit of a hangover, you might go for the full English. Contrary to popular belief, most English people don’t actually eat eggs, bacon, sausages, beans, mushrooms, fried tomatoes, fried bread and black pudding every single day, but you can’t beat one every now and then. 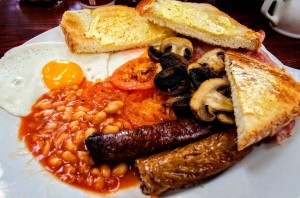 Sadly, though, places like Bar Bruno are a dying breed – they’re slowly disappearing. Sometimes this is because the next generation no longer want to work in places like this and so refuse to follow in their parents’ footsteps; also, tastes are changing and lots of people want to start their day with something healthier; but more often it’s simply because they’re squeezed out of the market. Business rates – the amount they have to pay for local services – go up, rents go up, and eventually the owners decide to call it a day. And what a sad day it usually is! 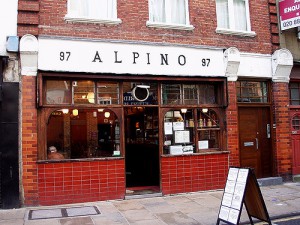 Obviously, big fry-ups are not for everyone: they’re unhealthy, they’re a vegetarian’s worst nightmare and they’re obviously off-limits is you don’t eat bacon or (pork) sausages because it’s against your religion. If you do fancy trying one, though, find yourself a proper London caff – before they’re all gone!

Want to learn more about British culture? We have just the course for you!