Grammar curiosities (and some nonsense) 9: the present continuous

It is curious how grammar is sometimes divided up. For example, while most teachers nowadays are quite happy to section off Would you like … as some kind of lexico-grammatical structure that can be taught to beginners, the low-level syllabus still dicatates that Have you been …? cannot be treated in this way (although … ahem … there are a couple of honourable exceptions!). In a similar way, we have split off be going to + verb as a unique structure entirely disconnected from (indeed, usually contrasted with) the present continuous, while the present continous with its future meaning is separated from its use for a ‘present’ meaning . . . and often the ‘present’ meaning is split off between ‘in progress right now’ and ‘happening around now’! What’s more writers and teachers often try to find contexts that clearly fit these ‘different’ uses and in doing so, they avoid natural examples which may actually show these differentiations to be more ambiguous than they’d care to admit. I guess this is seen as being particularly important at lower levels because of the fear of confusing or overloading students.

“But ambiguity gets in the way of my teaching”

This all came into sharp focus during a discussion we had with an editor about the following box:

We use the present continuous for activities now or at the moment (and not with every day, always, usually, etc.)

Is it raining outside?

Her son’s not feeling well.

The editor (or maybe the Teachers’ Book writer) commented that they thought Is she coming? had a future meaning.

I personally didn’t think so, but you be the judge. Here is the dialogue which the example comes from.

A: Where is everyone? We said 3 o’clock.

A: Hi Lizzie. We’re waiting for everyone.

C: Yeah. they’re coming. Jaime’s getting coffee for everyone and Ulla is talking to someone on the phone.

D: The machine’s not working!

A: And Katya? Is she coming?

Now, there is undoubtedly some ambiguity about this, and perhaps it’s like one of those pictures where you either see a rabbit or a duck: it initially depends on your perception about what you see, but when the alternative is pointed out, you can actually see and accept both realities. It is, I think, quite possible that a fluent speaker simply doesn’t think about whether they are referring to the present or future, but actually just uses Is X coming? as a phrase to refer to a meeting that both people are / will be at!

There are three potential solutions to this example of ambiguity:

We could change the way the conversation is expressed to avoid the use of a present continuous – assuming you think it’s a worthwhile conversation to have:

A: Where is everyone?

A: Femi is in the toilet.

B: Howard is in the kitchen. He wants a coffee.

I have done something like this, for example, with a conversation about the future where we just used the simple present to avoid ‘complications’. So the question there is Do you have any plans? and the answers stick to what the other person wants/needs to do. It works up to a point, but you quickly either sound a bit stupid or you simply can’t go on without needing to use different forms.

We could change the context and what we ask students to do in order to disambiguate the meaning of the form. This is, of course, what many books do. Asking students to describe pictures or provide an example where someone is doing something different to their normal routine – such as the undercover boss in English File, which some of you may know. Note that here too there is an effort to separate out examples between the actually doing now as I watch and the around now / not always activities. The result is that writers and teachers end up going down the rather odd process of describing things like some kind of voyeur: He’s taking off his jacket; She’s playing the piano; They’re dancing or else they just state the bleeding obvious:

While describing can of course use the present continuous, it certainly doesn’t have to. Things that are perceived to be complete at the moment of description can be described using the present simple – he shoots, he scores. And then for those of you who use videos to practise descriptions (like I used to in the past before recognising the error of my ways), you might consider how we actually describe a scene in a video in normal conversation. We generally use the simple present all the way through unless one action is interrupted by another (i.e. essentially like narrative tenses). In other words, forcing students to describe what’s happening in real time with the present continuous, you may be actually be practising the wrong use of the tense!

Similarly, it turns out that the context of the undercover English File boss doesn’t really work to provide unambiguous examples either. In the text, these are the examples designed to present the idea of now, but not always / often, etc.

In episode one, David Clarke, the boss of a hotel chain, is working undercover for a week in one of his hotels. He usually works in an office, but today he’s working in a hotel …

There is, in fact, already some ambiguity in this written context. Are we reporting someone’s experience (which would usually mean using the past tense) or are we reporting what happens in the epsode of a TV programme, in which case we probably wouldn’t use the word ‘Today’ or the present continuous for some of these examples. On Wednesday, David works in the restaurant and serves … .

But even if we accept that the context provides clear examples of the present continuous rule, what about the use of the present simple in these examples, which end the article:

After the programme, David changes some things. He gives the good workers more money.

Surely, changing things and giving a pay rise is ‘now and not always / often, etc’ – unless they are very lucky employees! Here, by saying it, you’re showing you see the changing and giving as basically completed actions (though now I think about it, if I were in the moment of speaking, I would probably say “I’m going to change / I’m changing a few things” or “I’m giving you all a pay rise”!) Wow, when you get into it, the meanings of the English tenses do start to seem pretty darned complicated.

Complicated? Or just fuzzy? Isn’t much of the complication here actually the result of conceiving of the present continuous as having a number of entirely separate and disconnected meanings? What if we just stuck to a single meaning that encompasses all uses – how about connected to the present (or around now) and unfinished? Admittedly, it’s a bit vague, but that is the nature of the meaning of tenses!

Which brings us to the third option: that we stick with our context and examples of waiting around for people (or whatever other natural conversation you choose). In doing so, we accept that there is potentially ambiguity in the underlying meaning of the grammar, but where we have a true natural context, these ambiguities may not even be noticed. No student – especially at this level – is ever going to question whether everyone is talking about the meeting that is about to happen or about some other future one! In the same way, if someone asks What are you reading at the moment? the fact that I don’t have a book in my hand is a pretty clear indication that I’m asking about some other reading around now.

It follows on from this that there is a real question about whether there is actually anything else to learn about the present continuous other than more examples of real usage. This might imply a somewhat different approach – for example, saying what all the examples have in common in terms of meaning or how they all relate to the core meaning. Alternatively, we might go along with Danny Norrington-Davies’s idea that you simply ask students to suggest why the present continuous form is used in the particular context – and work from reasons to rules. 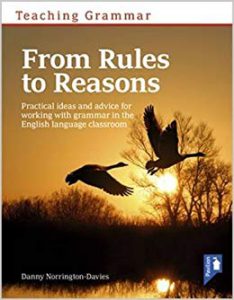 Of course, both of these previous ideas are a bit difficult if you are teaching low levels in English only, as students probably won’t have the language to articulate either reasons or rules. That may also be the problem with a definition of ‘connected to now and incomplete/unfinished’. Will students understand ‘unfinished’? Maybe not . . . but then perhaps that might be a reason to make use of L1 (albeit briefly).

Want to get better at teaching grammar? Take our TEACHING LEXICALLY course this summer.

Word of the day: pandemic
Wherever you are in the world, the news over the last few weeks has almost certainly been dominated by one

Chunk of the day: room for improvement
This afternoon I interviewed someone who's applied to do one of our language courses this summer. We like to Skype

To say that the CTEFLA that was my gateway into the world of English Language Teaching encouraged me to be output-focused would be an understatement. Like many teachers who’ve come through the British ELT system, with its roots firmly in…