Grammar nonsense 7: the syllabus for Beginners

It’s been quite a while since we last published a post in this particular series. Writing both a Beginner-level book as part of the Outcomes series and two levels of the new Pearson series Roadmap really hasn’t left much time for writing anything else – especially given my typing speed and slowness of thought. And not having small children, I prefer to sleep in rather than get up at the crack of dawn and bash out a blog post before breakfast as Hugh seems able to do! Anyway, that’s quite enough of excuses. With a little bit more time opening up for me now, I thought I would return to the theme of grammar nonsense!

Now, you might think that at Beginner level, as the grammar is rather basic, there surely can’t be much in the way of nonsense to report on! Plurals do indeed generally end in ’s’, adjectives are not modified with a plural ‘s’ in English, and they usually go before a noun, rather than after it, etc. No controversy there, but writing Outcomes Beginner actually threw up quite a lot of nonsense for us to deal with – as well as the occassional curiosity, – with the biggest issue being the ‘Beginner syllabus’ itself. 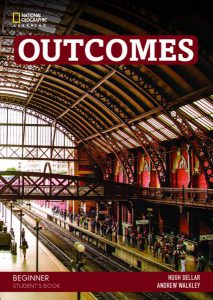 For those unaware of how the book-writing process works, preparation for most coursebooks starts with the construction of the syllabus. This generally involves making a list of the grammar and topics covered in other books at the same level! This selection is then seen as what needs to be covered and your USPs (your unique selling points) – whether they be puppets or tasks or real-world texts or whatever – are fashioned around these “essentials”. At higher levels, what is deemed essential becomes less secure and so there is some flexibility to work around the core of items you find in all books. However, when it comes to beginner books and, to a large degree, Elementary ones too, both the grammatical content AND the order are pretty much exactly the same in every series aimed at the global market.

present simple + adverbs of frequency/prepositions of place and time

OK, there is some slight variation in the second half of books once be and the present simple have been firmly established.  One or two books introduce the present continuous (in its present meaning – started but not finished) before the past simple. One or two books introduce there is / are earlier as part of the focus on be. There are also different lengths of units and of books themselves, but these have marginal impact on the above. What’s more important are the ‘rules’ that accompany this order:

Essentially, they present a linear building block approach to learning.

Practise and ‘master’ one area before moving on to the next.

It’s the combination of these fixed grammar syllabus and set rules – as much as the actual order of syllabus – that is, to my mind, grammar nonsense.

It’s nonsense for these reasons:

I will explain a bit more about the effects of all of this in some future posts. However, my point here is to expose the real nonsense. Even if the building block approach is true, what strikes me as crazy is that ELEMENTARY courses then follow almost the same pattern (albeit slightly speeded up) and with the same rules. What’s that all about? Surely, if we have built the blocks correctly, then you could have examples of past simple, be going to and other patterns from the very first page of Elementary, and we could introduce been or will, say, in unit two or three. Instead, on average Elementary students have to wait until around page 54 to see an example of the word went and you finally get to see been – one of the top hundred most common words in English – in unit 12. If you make it that far, that is! Isn’t this really just an admission that something has gone wrong? Beginner courses, it seems, are basically building Jenga-style towers. They are perhaps fun at times to create, but they have no long-term purpose – other than to collapse, so can we start again!

Want to develop your teaching of languages at low levels? Take our online course.