So, following on from my recent post on verb patterns, I’ve managed another one already. You know how it is: you wait for hours for a bus and then two come along in quick succession. Not that this is a bus which you’ll want to be taking, because it will take you to the hell that is the set of verbs where the verb pattern changes their meanings depending on whether they’re followed by and –ing or infinitive (with to… maybe).

There aren’t that many of them.

remember, forget, go on, regret, try (kind of!), learn and teach, stop, like (in British English)

It’s usually this last reduced list that triumphs in coursebook materials, passed down from one series to the next like some kind of family heirloom that nobody really likes and that turns out to be worth precisely NOTHING! Why did anyone think it was of any use in the first place?

Why are you worrying about things that haven’t happened yet?

The first and most important point to make about this issue is something we have seen before in these posts on grammar nonsense, and that is the creating of rules (and confusion!) in anticipation of errors that will:

(a) quite possibly be never made
and (b) even if they are made, will not cause any misunderstanding in the fuller context of any given conversation.

It’s a kind of neurosis to worry about things that may never happen, and it can paralyse us from doing what we want. I’d suggest the same can be true of teaching much grammar – and especially this area of grammar!

For those who have suffered the CELTA agonies of lesson planning, you will be familiar with the concept of ‘anticipated problems’ connected to language analysis. Quite apart from the struggle of trying to find a list of potential problems for a piece of language you have never considered and for students you have never met, these sections are essentially creating the kinds of neuroses mentioned above. I think they also create a mindset that focuses on minutiae rather than what students are actually trying to say.

In class, teachers may look for the problem they anticipated rather than pay attention to students and their actual message. Or worse, they may seek out or create material that attempts to teach and encourage practice of ‘rules’ (because we must always practice!) to solve the supposed problem before it ever actually appears and never allow the students to actually say anything freely!

It’s like going round and unplugging everything in the morning before you leave the house while the pan you left on the stove has already caught fire! Kind of. Obviously, teaching the different forms of try has somewhat less dangerous consequences, but think of the hours and resources wasted on these areas. It isn’t even just the grammar nuggets in our coursebooks, and classes, but there are now thousands of sites and videos online. And now this blog!! Can we put an end to this madness?

Distinctions without a difference

I have mentioned before how the definitions we give for forms are, at best, fuzzy and that they frequently overlap with other forms between which we are trying to draw a distinction. Take the difference between try to do and try doing. The typical definition is the one given in Learn English: try to do is ‘make an attempt’, while try doing is ‘make an experiment’. Just to ‘clarify,’ it’s often added that the first is ‘difficult’ while the second is not.

As a profession, we somehow seem to have convinced ourselves that these definitions are clear and true and our confirmation bias finds lots of examples to support our conviction. However, if we are totally honest with ourselves, this is the infamous distinction without a difference. I mean, some things you might attempt are easy for some people and some experiments are difficult. An experiment is a kind of attempt and an attempt is a kind of experiment (Can I do it? What will happen?). Furthermore, and despite the rules that we give, both attempts and experiments may succeed as well as fail! In the face of this, most of the examples given in books (and no doubt by teachers) are written to fit the so-called rule. Expect to see people trying to climb Mount Everest, or trying to learn to ride a bike backwards. And they probably will add “it’s really difficult” just in case students still don’t get it.

Look at these examples:

I tried sending her flowers, writing her letters, giving her presents, but she still wouldn’t speak to me. (Practical English Usage Second edition).

Is this an experiment? I know there are several things listed to make it seem that it might be, but to me, it sounds more like various attempts to apologise to a stubborn (nay, difficult!) person.

In whose ear does it sound ‘wrong’?

So given this, how are students supposed to employ this rule accurately? Basically they can’t, and therefore focusing on such things and teaching the ‘rules’ are pointless. It’s impossible to write a gap-fill that students should complete with –ing or infinitive after try, where all fluent speakers would agree on the answers. I’m not saying there will be an equal number for each option, but that’s the point: correctness in this case is entirely personal, a question of what I would say, or, more to the point, what the students’ particular teacher would say. It’s not a general truth. The same is true for distinctions between like doing / like to do.

You can tell that the ‘difference’ in meaning for try to like / try liking, etc. is basically nonsense because you will find examples of both forms in the same context. At best, we can say it’s a question of perspective. In the case of mean, regret and remember, where we can see that the forms have a more clear distinction, then the two forms will rarely appear together in a single text or conversation precisely because they have entirely different functions.

This is a point Michael Hoey makes when talking about how we use homophones and homographs, in that they typically vary not just in collocation, but colligation, co-text, topic, etc. We might learn remember and don’t forget + infinitive in the context of asking people to do things, but at a completely different point learn remember -ing when talking about our childhoods. Similarly, regret to do is almost entirely a formal written formula, which is also why ‘practice’ of these distinctions is rubbish, because you need completely different topics and tasks!

Just to be clear here, I’m not saying don’t teach the patterns. However, why do we have to bring them together? Teach the patterns separately, through examples in their appropriate context. And also understand that precisely because the contexts are so different, it’s unlikely that students would confuse their different uses.

And what about the other patterns?

It’s also interesting to note that the remember + -ing and forget -ing meanings are just as commonly expressed as a verb + clause!

Do you remember when we played that trick on the teacher?

Oh yeah. I forgot you were there too.

I forgot I told you about it before.

In fact, it’s quite difficult to think of an example of forget + -ing other than in the chunk I’ll never forget …..-ing . So why don’t we say that the ‘that clause’ patterns ‘change’ the meaning of these verbs (as it does in the case of mean to do versus mean that … )? We don’t because that spoils our little set of verbs, our little grammar nugget. And that nugget isn’t looking very meaty if we remove these verbs, and it could be even less so when you consider that …

Stop to do isn’t even really a verb pattern!

As is pointed out in Swan’s book, stop to do is actually ‘stop’ followed by an ‘infinitive of purpose’. On this basis, we could include all kinds of other verbs as having this verb pattern, including some that also could be followed by an –ing form. Go (go to see the bank manager / go swimming) write (I’m writing to ask you to stop teaching differences between try to do and try doing ) etc. We could include this, but please don’t!

I’m keen for everyone to give more examples of words as you teach them using the grammar which we typically use them them. I’m also happy to have exercises that draw attention to patterns as they appear in actual use (as we saw with the ‘reverse gap fills’ in the previous post), but I want this to be an ongoing thing. It should just be a normal part of vocabulary learning rather than a separate grammar nugget. In fact, let’s call this particular item a grammar mouldy biscuit – something indigestible that really should be thrown away! There are so many better things we could eat!

Here endeth the rant for today.

Back to school Part 2: TomAYto TomARto
In my last post, I …
Read more.

Back to school: Part One
As you may have noticed, we …
Read more. 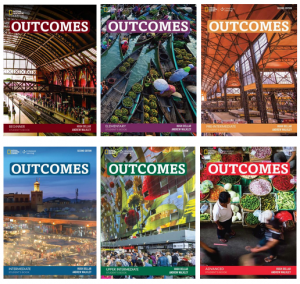 Beyond word lists: eight ways to get more from the OUTCOMES Vocabulary Builder
One of the more innovative add-ons …
Read more.